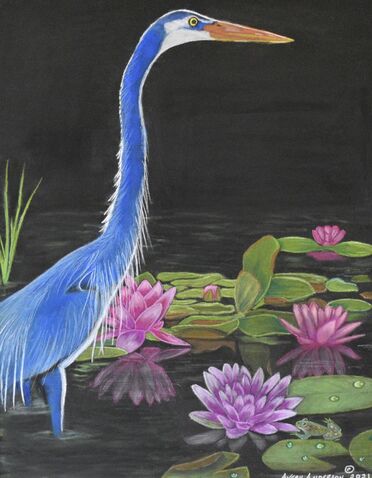 Pastel painting of a Great Blue Heron fishing at night.  "Watch out little frog"!
11 x `14, comes with a double mat and signed Certificate of
Authenticity.
​$250

This piece was awarded a Bronze Award from the Camelback Gallery
in their 2021 Exhibition, "Into the Wild" 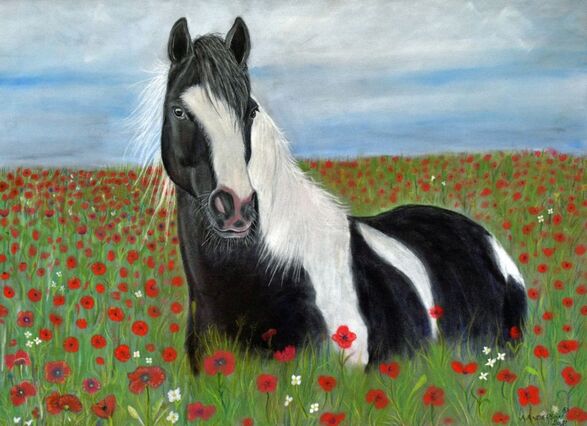 Just a beautiful paint horse hanging out in a field
of poppies.  Pan Pastels and pastel pencil, 11 x 14, double
matted, signed, Certificate of Authenticity
$250​
This piece was just awarded Special Recognition by the Light,
Space and Time Gallery in it's 2021 Animals Art Exposition (there
were over 895 entries) 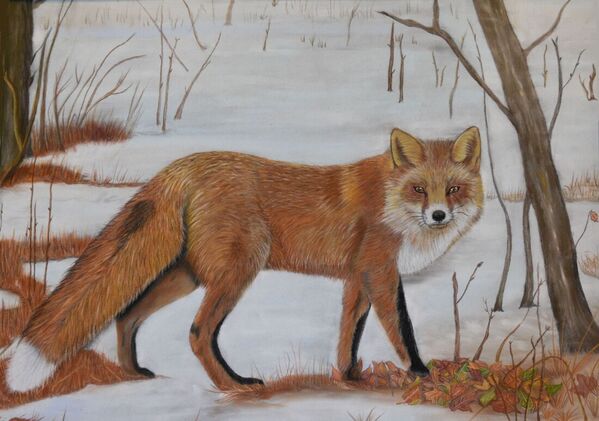 Pastel painting of a beautiful SN Red Fox in winter.  The Sierra Nevada red fox, also known as the High Sierra fox, is a subspecies of red fox and likely one of the most endangered mammals in North America. The fox's Sierra Nevada Distinct Population Segment is estimated at 29 adults near Sonora Pass in California.​ This portrait is another in my series
devoted to Oregon's endangered and threatened wildlife.
13" x 18"
double matted, signed, Certificate of Authenticity
​$175 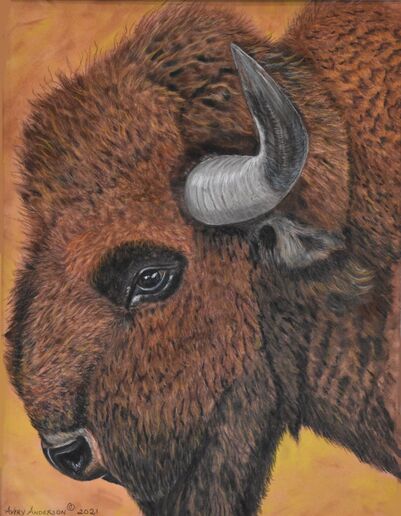 This beautiful guy was a joy to do, and I thank my friend, Harrison Applegate, for the use of his wonderful reference photo.
11 x 14, pastel painting, that comes double matted,
signed, and with a Certificate of Authenticity
$275 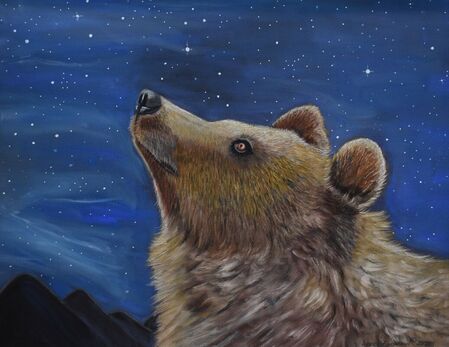 Sitting on my deck one evening with my dogs, watching the star studded sky, this image came to me.  It was such fun working on this beautiful guy.
11 x 14 Pastel. signed and matted and comes with a Certificate of Authenticity
​SOLD
Special Note:  "Stargazer" was awarded a Special Recognition Award from the Light, Space and Time Art Gallery competition " 10th Annual Nature Art Competition 2020" 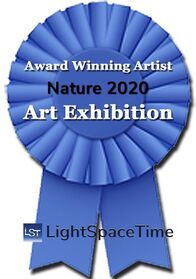 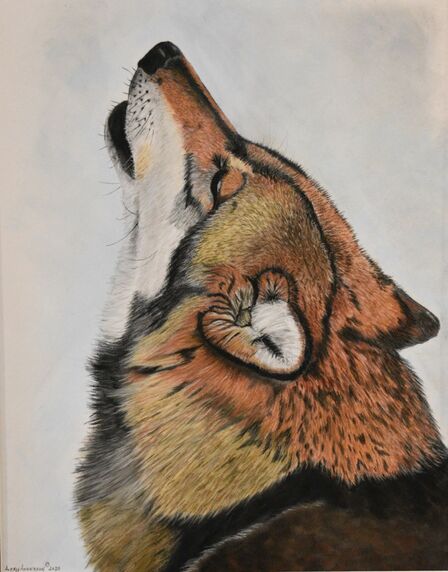 Portrait of a Red Wolf howling,    11 x 14, pastel
The red wolf is one of the world’s most endangered wolves. Once common throughout the Eastern and South Central United States, red wolf populations were decimated by the early 20th century as a result of intensive predator control programs and the degradation and alteration of the species’ habitat. When the red wolf was designated endangered in 1967, the U.S. Fish and Wildlife Service initiated efforts to conserve and recover the species. Today, about 40 red wolves roam their native habitats in eastern North Carolina as a non-essential, experimental population (NEP), and more than 200 red wolves are maintained in captive breeding facilities throughout the United States. 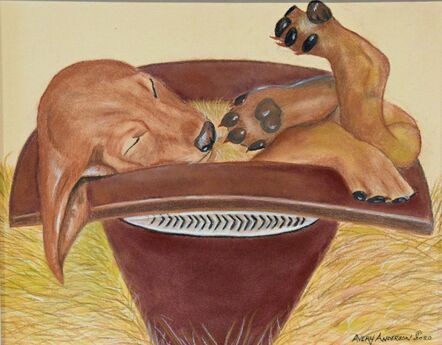 A tired little ranch pup napping in his Dad's hat.
8 x 10. pastels, signed and matted and comes with a Certificate of Authenticity
​$150 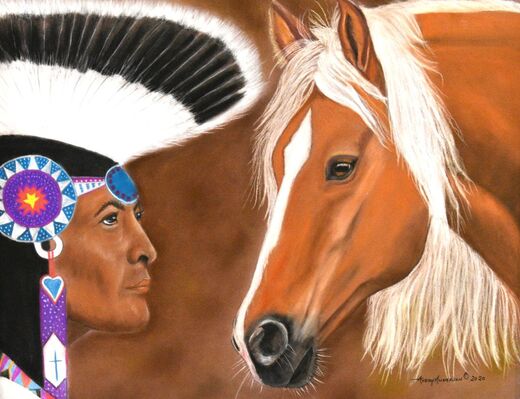 This is the first time I have incorporated a human figure
into my work.  Animals are my main interest and passion.
However, I wanted to express how closely we are, or can be,
connected as two entities if we open our hearts.
11 x 14 pastel painting, signed, double matted and will come
with a Certificate of Authenticity
​$275 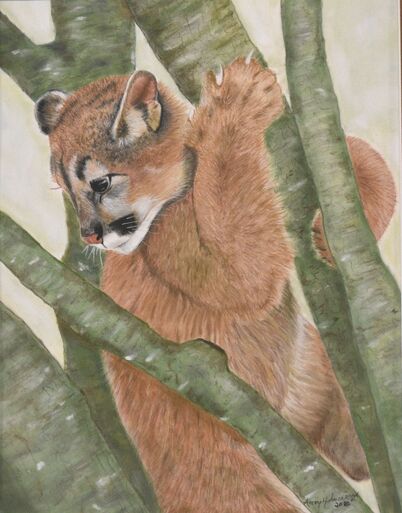 A cute little cougar cub attempting to climb
a tree for the first time.
11 x 14 pastel painting, signed and double matted. and
​will come with a Certificate of Authenticity
​$175 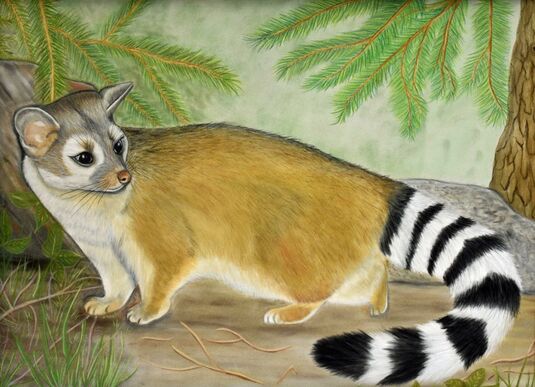 The Ringtail cat is an Oregon state sensitive species.  It is a relative of the raccoon.. “Cat” likely came into many of the common names for ringtails in part because ringtails are about the size of a house cat and in part because, as legend has it, gold rush era miners once enticed ringtails to live in their cabins as pet mousers.  They are probably one of the cutest mammals you will never see as they are nocturnal and extremely shy.   This portrait is another in my series
devoted to Oregon's endangered and threatened wildlife.
Pastel painting '13" x 18"
$175 signed and matted
includes Certificate of Authenticity 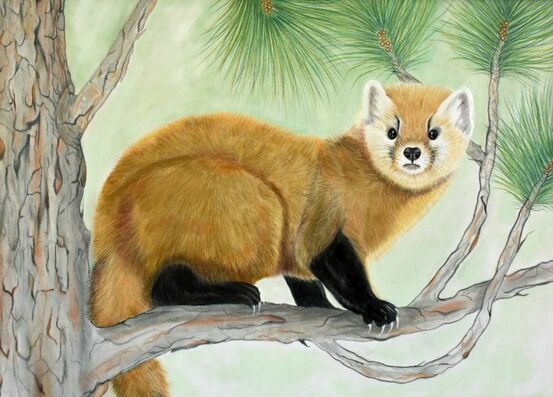 The American, or pine marten, is an Oregon state sensitive species; remaining populations exist in parts of the Cascade and Coast ranges and the Klamath, Blue and Wallowa mountains. An ancient species that is part of the weasel family,  ancestral martens are believed to have crossed into present-day Alaska across the Bering land bridge from Siberia during the ice ages.  This is part of an on-going series that is devoted to Oregon's endangered and threatened wildlife.
Pastel painting
13" x 18"
$175 signed and matted
​includes Certificate of Authenticity 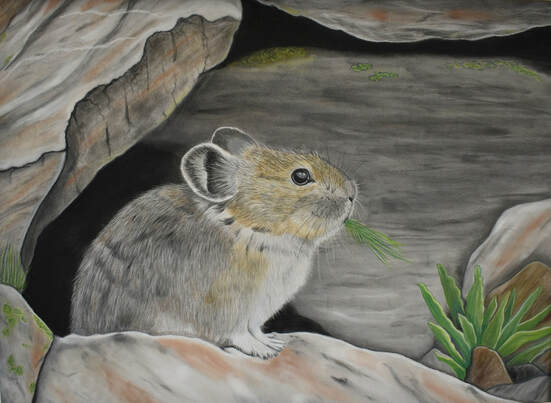 The endangered American Pika is officially extinct in portions of California’s Sierra Nevada mountains, and climate change is the culprit, according to scientists. They are relatives of the rabbit and hare, but are the size of a guinea pig.
13" x 18" pastel portrait. 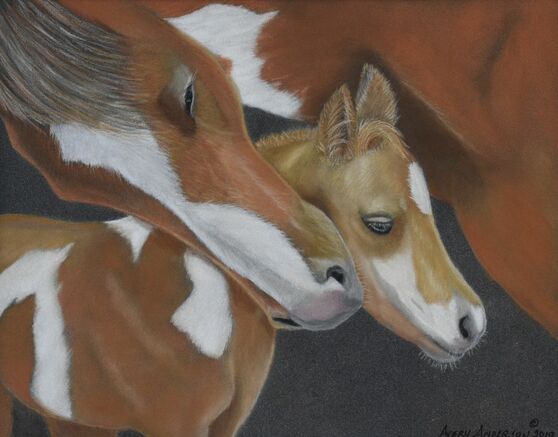 There is nothing so sweet as the bond between a mare
and her foal.  This portrait is 8 x 10, created in pastels, double
matted and framed.
Signed and dated 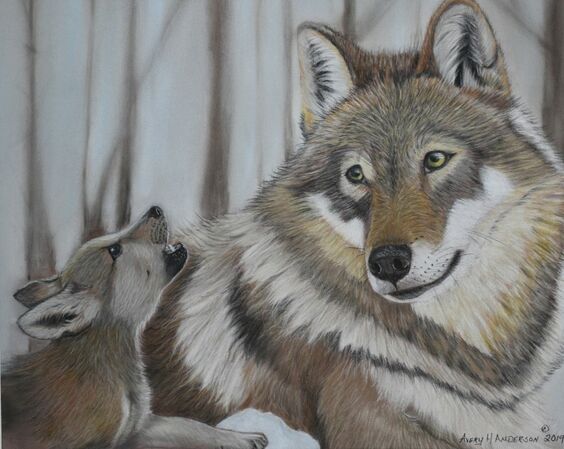 Just like human children, wolf pups have a learning curve
which takes place under the watchful eye of their mother.
8 x 10 image,  double matted.   Pastels, signed and dated.
$150
​includes Certificate of Authenticity 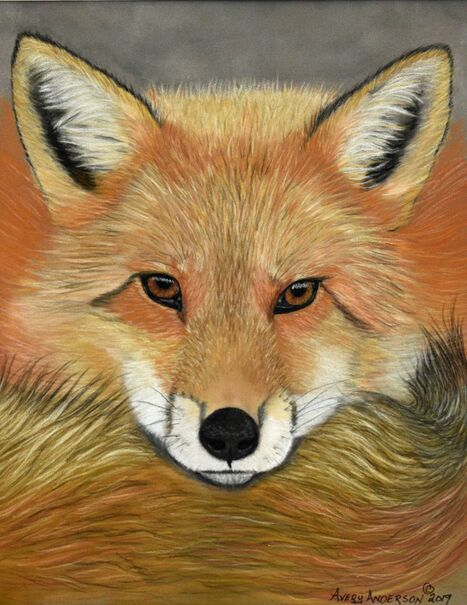 Cute little red fox resting with his tail curled around him. Did you know
a fox will use his tail to provide warmth!
8 x 10, double matted.
Pastel portrait, signed.
$150
​includes Certificate of Authenticity 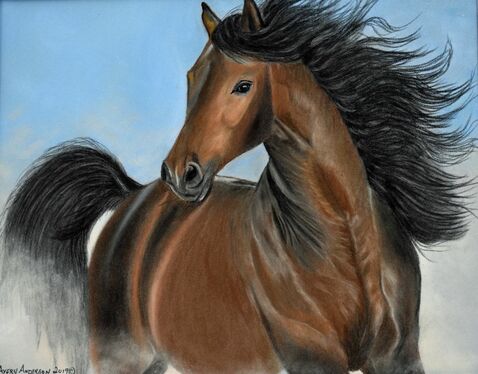 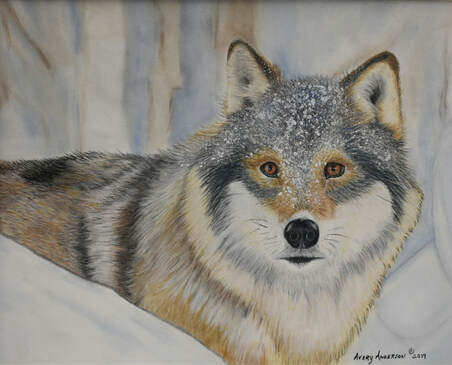 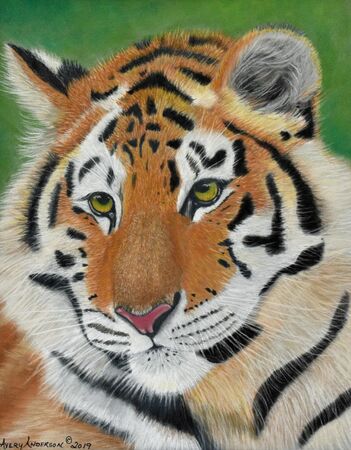 Another image of a sweet young tiger.  Size is 8 x 10, acid free mat, and framed
in a rustic frame with UV Non-glare glass.
Pastel painting, signed 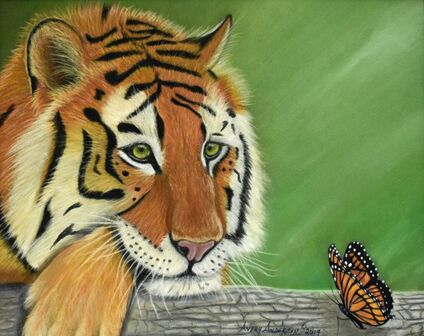 Image is of a sweet Tiger cub staring at a Monarch Butterfly.
It is 10 x 8, comes with a double mat, UV non-glare glass, and a rustic frame.
Pastel painting, signed 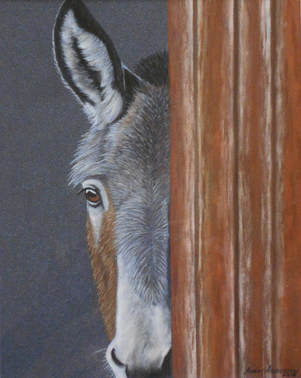 This piece features an adorable donkey peeking around
a barn.  Image size is 8" x 10", framed size is 15" X 18".  It is double matted with
UV non-glare glass.  I have framed this is a barn board frame that
is stained a cherry color, which ties in beautifully with the painting.
Pastel painting, signed
SOLD 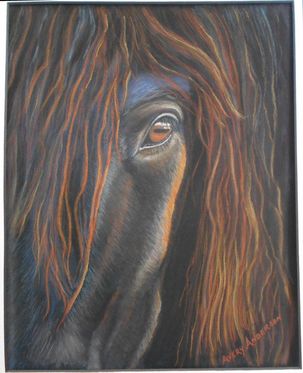